The HuMa regulators are designed and developed by a couple of guys in the Netherlands. They have and continue to developed a number of interesting airgun parts and regulators for a wide range of rifles. Have a look at the HuMa Air website >>here<< for the current line-up of regulators and parts they produce.

What is a regulator?

A regulator is a device that regulates the pressure between the air cylinder/bottle and the firing valve. It allows air to to flow through to the action until it reaches a pre-set pressure and then it shuts off the air until a shot is fired, creating a constant pressure at the firing valve. When the rifle is fired this pressure drops, then the regulator opens to allow the air to flow through to the firing valve again until it reaches the pre-set pressure. By fitting a regulator you eliminate the power curve and the hunt for the sweet spot that is common with most unregulated rifles.

Where does the regulator get fitted?

Can the regulator be user adjusted?

Can the regulators be serviced?

Yes, the HuMa regulators can be serviced, repaired and rebuilt. Seal kits are available from the eShop and there are videos on the XTX Air YouTube and Vimeo channels that show how to service the regulators.

Which rifles can a HuMa regulator be fitted to?

There are HuMa regulators for many different brands/models of rifles, the list is constantly growing, as new models or rifles are released and new airgun manufacturers come onto the market. Below are some of the models currently available:

The BSA HuMa SE regulator allows the on board pressure gauge to read cylinder pressure unlike other regulators that only read the regulator pressure, so no guessing how much air you have left. The regulator has been designed to replicate/replace the existing valve body adaptor, this means that the rifle does not need to be modified when fitting the regulator, so less chance of leaks etc. It also means that it is possible to put the rifle back to standard without having to replace a number of expensive parts. There is a DIY fit version of this regulator available from the eShop or you can have one professionally fitted.

The HuMa BSA Regulator for the Ultra, Scorpion, Hornet, Goldstar SE and Gamo Dynamax. This regulator adds around 36mm to the length of the air cylinder, which means you may need to use a slim silencer, shroud or barrel extension after fitting one.The benefits of this regulator over other regulators currently on the market:

The HuMa SPA P10/P12 regulator has been designed for the Chinese SPA P10 and P12
bullpup. They fit inside the air cylinder and do not need a vent hole drilled in the cylinder unlike some other regulators. They are DIY friendly.

The HuMa Hatsan regulators have been developed for the AT-44, BT65 and the Galatian 2. These are fitted inside the air cylinder and do not involve drilling the air cylinder unlike some other regulators. They are DIY friendly but currently only available for FAC/high power models, not sub 12ftlbs models.

The HuMa Crosman Benjamin Marauder regulators have been developed to replace the pressure gauge block in the Marauder so that you do not lose any of the cylinder volume. They are DIY friendly.

The HuMa Air Arms S4*0/S510/HFT500 regulator has been developed for the Air Arms S400, S410, S510, TDR, Ultimate Sporter and HFT500. They fit inside the air cylinder and involve drilling a small vent hole in the cylinder. They can be DIY fitted or they can be professionally fitted.

The HuMa Air Arms EV2/FTP900 regulator has been developed to completely replace the standard EV2 (all models) and FTP900 regulator. They don't need any holes to be drilled in the air cylinder so the rifle can be put back to standard. The pressure gauge assembly on the EV2 will need to be removed to fit the HuMa regulator, the FTP900 remains unchanged. Both the EV2 and the FTP900 will need to be free floated to allow the HuMa regulator to be fitted.

The HuMa Daystate Regal regulators have been developed to fit into the Daystate rifles with a 2 piece hammer tube (sadly not the older one piece tubes). The air cylinder does not need to be drilled like you have have to do with some other regulators. The regulator is vented so it will not lock up like un-vented regulators do. Sadly these are not DIY friendly unless you have access to a milling machine and a lathe, they will need to be fitted by myself or somebody who is familiar with the workings of the Daystate rifle and regulators.

The HuMa Evanix regulators have been designed for the Evanix Sniper K, Blizard and
Rainstorm S10. They fit inside the air cylinder and do not involve drilling the air cylinder.

The HuMa Jkhan regulator has been developed to fit inside the Jkhan air cylinder. It does not involve drilling the air cylinder.

The HuMa EDGun regulator has been developed to fit in the EDGun Matador, it does not involve drilling the air cylinder.

The HuMa Kalibr Cricket regulator has been designed to replace the standard regulator and does not involve drilling the air cylinder.

The HuMa FX regulator has been designed to fit a number of FX models, including the T12 (not the Whisper), Cutlass and Typhoon. They may also fit other models, have a look on the HuMa Air website for more details.

The HuMa external inline regulator has been developed for people who like to shoot while tethered to a dive cylinder for ultimate consistency.

There are more regulator designs coming out all the time, as new models of rifles are released onto the market. For the latest models please have a look in the eShop, under the brand of your rifle...

How long does it take to fit?
It depends largely on how familiar you are with your rifle and the type of tools you have access to. Some rifles are very easy to strip and regulate, others are more complicated. Some rifles may involve specialist tools, machining and/or a good deal of patience to get the rifle and regulator set up properly. Some of the regulators can be fitted in under an hour, others may take a day or more to get 100% right. Have a look at the fitting instructions to get an idea of what is involved when fitting a regulator to your rifle. If you decide it is too complicated or it involves tools/machinery you don't have access to, you can get the regulator fitted by a professional.

What are the benefits to having a regulator fitted?
Unregulated rifles tend to have a “power curve” with a “sweet spot”. The first few shots after a fill may be under powered then the power increases until you get to the sweet spot, where they are more consistent, then the power drops off as the rifle runs out of air. Once your rifle is regulated you are in the “sweet spot” for the whole fill, until the regulator stops regulating at whatever pressure it has been set to, then the power will tail off as normal. The regulator makes the rifle more consistent and more air efficient, which improves the shot count and can improve accuracy. It also allows you to fill the gun to a higher pressure (never fill to higher than the manufacturers maximum fill pressure), which will further improve the shot count compared to an unregulated rifle. Regulators are primarily for improving consistency and getting rid of the power curve, the fact that the shot count usually improves is a bonus. If you only want a higher shot count and you are not concerned about the power curve then it would be cheaper to fit a longer air cylinder.

How many shots can I expect from my airgun after the regulator is fitted?

Please note these figures are averages and some rifles may be higher or lower and it also depends on the pressure the reservoir has been filled to, the type of pellet being used, the power the rifle is set at etc. The higher the power the exponentially lower the shot count.

What pressure should I fill my airgun to after a regulator is fitted?

Some feedback from HuMa regulator users/installers can be found >>here<< 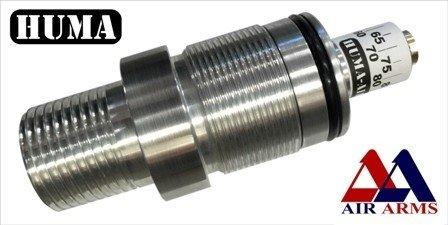